Anyone who knows me well can tell you how much I care about Angular. You even might have guessed it from all the talks I give here and there at local and international events, open source applications I publish, and blog posts or tweets I write. All of this is to show you how awesome is Angular! It is arguably the most feature complete framework available in the market today!

But, now I’d like to tell you exactly why Angular matters to me, and why it should matter to you as well. It’s not just about the framework or the technology, Angular is more than just a tool.

The first time I came across the AngularJS framework, it was back at the end of 2011, the 1st version of Angular was called AngularJS. Back then, at work we needed a more robust framework to build up our next technical stack for our “enterprise-y” projects. Our previous tech stack was built upon Backbone.js and a bunch of jQuery plugins. Don’t get me wrong, that stack was doing an incredible job. I personally was quite happy with that; It just couldn’t scale up while the team was growing. It also was missing some core components, like a solid unit testing framework and a well-defined build and packaging process. Then, I discovered AngularJS.

The more we were using AngularJS, the more the team was enjoying front-end development (this was 2011!). You could clearly see it. It offered us virtually everything we needed for our enterprise applications (MVVM pattern, forms, HTTP, routing, testing, DI, etc…). Some features were innovative in front-end development for that time. Anyways, we were very happy and were very productive using the tool.

My favorite feature in AngularJS was the Dependency Injection implementation.

Also, the more I personally was hacking with AngularJS, the more I could see all the incredible and genius work the AngularJS core team had put into the tool. My favorite feature was the Dependency Injection implementation. I even learned a lot just from reading the implementation.

I then instantly fell in love with the tool and it became my go-to choice for every project, both personal and professional. Even today, I got to work on so many cool technologies, but I always come back to the Angular platform.

But the story doesn’t end here...

One of the first public talks about AngularJs by Papa Misko Hevery!

Of course, I wasn’t the only one using AngularJS, the framework was already getting more and more popular and many fellow developers were also using it to build their enterprise Web applications.

Having spent some time learning the tool, its ins, and outs, I decided to step in and start sharing my learnings and findings, through blog posts and technical talks at local meetups, hoping this would eventually help someone.

Actually, I was amazed to find out that AngularJS was used by way more people than I could have imagined. There was an actual community around AngularJS. So I decided to join these passionate people. And I’ve never regretted that choice I made 7 years ago.

While I was still sharing every small bit of my learnings with the AngularJS community, I was always looking for new ways on how I can do more to help even more people; because beyond the tool itself, I also care about my fellow developers (not only Angular, by the way), I care about our productivity and the Developer Experience.

Then, in 2014, the 2nd version of the framework was announced: Angular, as we know it today. The core team had decided to rewrite AngularJS from scratch and build a much-improved version that can take advantage of the modern JavaScript APIs and toolings to build even faster modern and scalable Web applications.

As far as I was concerned, I was already part of the community, or as everybody likes to call it: “an active member”. This means that I was allocating some amount of my personal time to help the community, sharing and giving back. This eventually led me to join the Google Developer Expert(GDE) program for the Angular team, in 2015. This program basically supports active members of the community. That was the perfect timing because I was always looking how to help even more folks. So I took this nomination from Google and the Angular team as a major boost to level up my contributions. Being part of the GDE program enabled me to meet so many awesome people from the community. I even got to meet personally the Angular core team at their very own office, while there were working on Angular. How awesome is that! 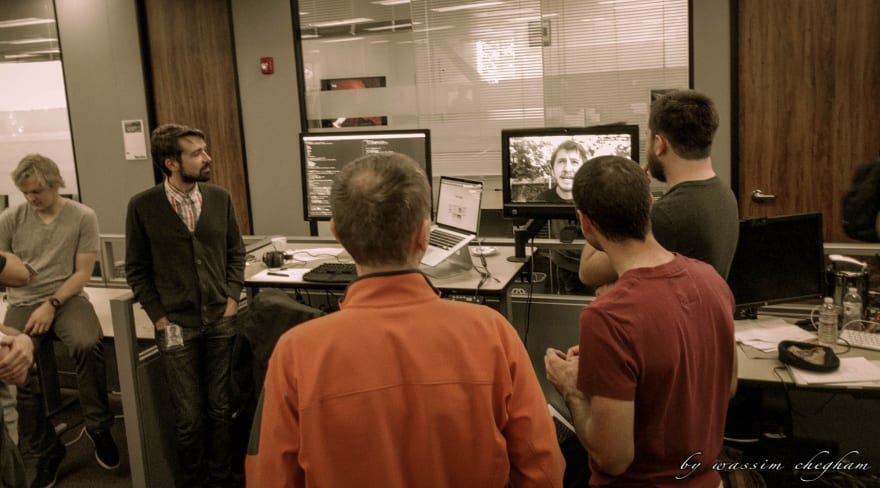 Please note that not all of the core team members are present in this picture.

And then, it hit me! I realized that Angular was more than just a tool we use in our everyday jobs. Angular is actually about the engineers from the core team at Google, plus thousands of other contributors from the community, who are working hard to make our day to day jobs a little bit better and more productive. It is also about the million of developers who are choosing Angular as their main platform to build their products.

A portrait picture of Igor Minar and me, and some other amazing Googlers and GDEs in the background.

When I talk about Angular with folks, both from Google and the contributors from the community, and when I see and hear their reactions, I can tell you that Angular is not simply about the tools, it’s about the people who are building it and the people who are using it. This is why it does matter!

As a GDE, this what makes me want to do more. From the first day, I decided to take this role very seriously and act as a bridge between the core team who builds Angular and the developer community (that is us) who uses Angular. Helping both sides as much as I can.

I started by helping PatrickJS and Jeff Whelpley who built the first version of Angular Universal, and eventually joined the team. 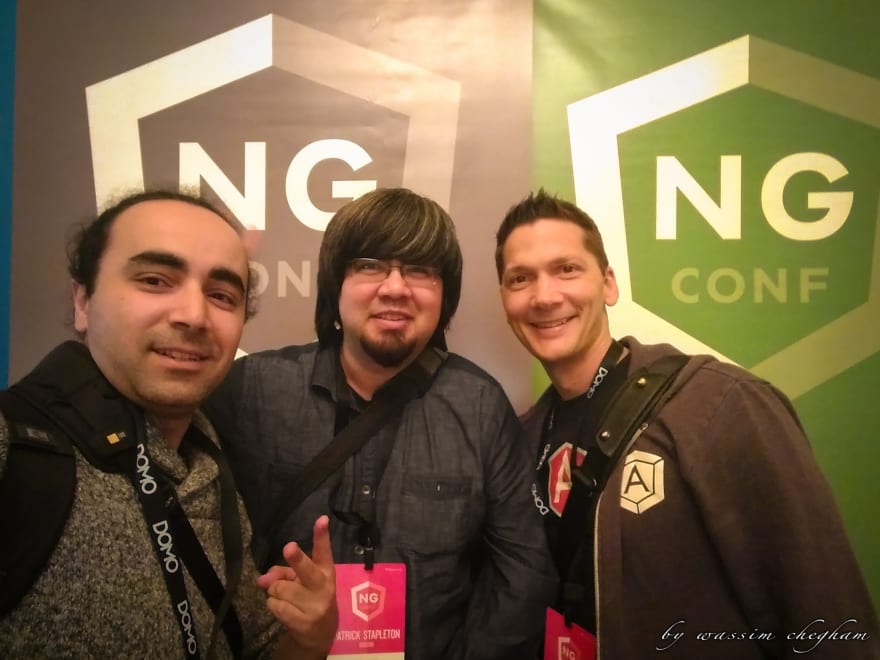 I am still glad and happy to be part of this amazing community. Working passionately to make Angular even more awesome! Trying to help and learn from my fellow developers as much as I can. I’m still helping by giving talks about Angular, anywhere on the globe, writing technical blog posts, delivering training and workshops, mentoring folks who need help, building open source tools and apps to help with DX, answering questions on my Twitter account (my DMs are always open), etc...

My favorite feature in Angular is it's Community.

There is no limit to what we can do to help each other! A huge THANK to eveyone for supporting my work, it means a lot! I’m also committed to always sharing my content for free to everyone! 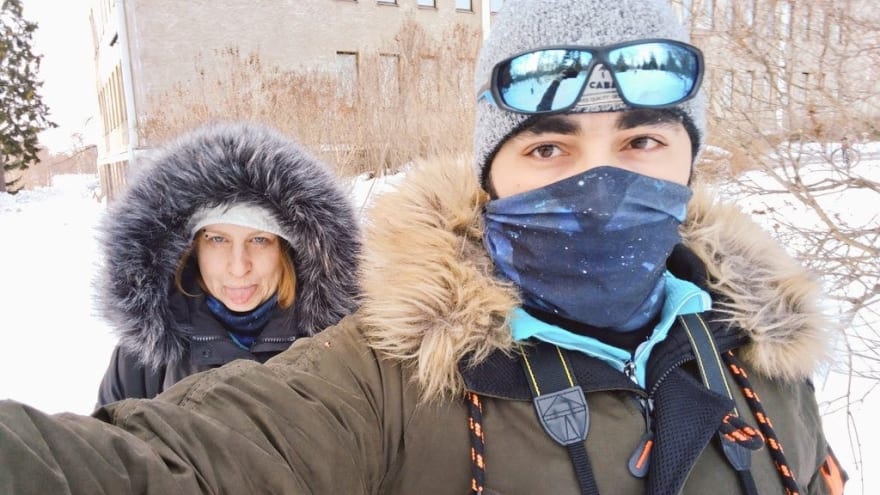 My fiancé and I during our road trip in Finland, just after the NgVikings 2018 conference.

Fun fact: I was invited to talk about Angular at NgVikings 2018, which was hosted in Finland. This was perfect, because I was planning for quite sometime about proposing to my girlfriend, and I wanted it to be under the Northern lights (Aurora Borealis)! The invitation came right on time. Can you imagine how excited and stressed I was? But, thankfully she said YES!

This also why Angular does matter to me! This is my personal story with Angular.

“I tell my students, 'When you get these jobs that you have been so brilliantly trained for, just remember that your real job is that if you are free, you need to free somebody else. If you have some power, then your job is to empower somebody else. This is not just a grab-bag candy game”?—Toni Morrison
Now, I want you to think about it: Does Angular matters to you? Why does it matter to you? Is it just a tool that you like using? Are you personally involved in the Angular community? Are you looking to get involved? Let me know how can I help…

I wanna hear your story...

Special thanks to our guest blogger Wassim CHEGHAM, a Sr. Cloud Advocate at Microsoft for his contribution to the Ronald James Blog this week.